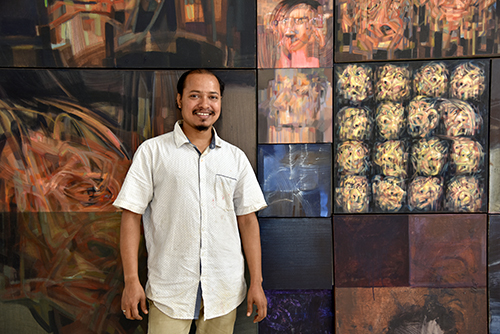 He has beautifully learned and experienced art from Indian art Institution and local art of India. During 1995-2000 he has stayed and studied by spending time at several state art colleges like in West Bengal (Government College of art and Shanti Niketan), in Madhya Pradesh (Kharagarh), in Uttar Pradesh (Banaras and Lucknow), in Gujrat (Badodara), in Maharashtra (J.J colleges of arts, Mumbai), in Bangalore , in Hyderabad, in Punjab and Chandigarh).

After receiving his bachelor's degree in Fine arts (BFA) from Delhi College of the Arts in 2005, he continued his masters (MFA) to complete in 2007. Later for few years he took guest lectures in the same college.

Persuading arts as his career and a passion, Mr. Anant has contributed significantly through various competitions (mostly solo) and has shown his art exhibition in India and abroad. He in recent has done an event on "PUBLIC ART INSTALLATION” title -The Wheel Of The Soldiers. Few others are -Consumer Number, West to Wow, Hand made Man Made etc. He has at travelled multiple locations like New Delhi, Punjab, Maharashtra, Uttar Pradesh and Uttarakhand to display a life size Dinosaur during 2007 to 2017.

Amongst many of his significant achievements, a few major are the exhibitions are:

Presently Mr. Anant resides to carryout his resarch based art work, paintings, sculptur and installation and new media art work in New Delhi, India. The people and place of his hometown are vital inspiration to his work. He has been perusing this as profession since last 20 years.